MarquipWardUnited unveiled their latest sheeting machine – the eCon sheeter at their facility in Phillips, Wisconsin, USA, in early 2014 to a group of local and international customers and agents. This in itself, was a very exciting event, however, the launch of this sheeter was different than any other product launch made in the history of the company. 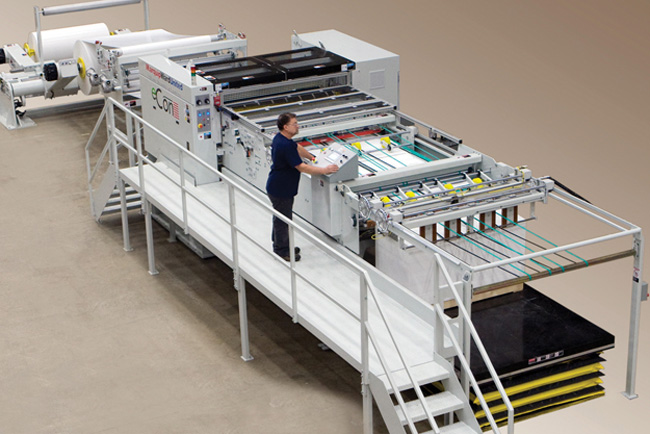 In response to the growing demand for lower cost sheeting solutions sought worldwide, leadership at MarquipWardUnited handed the engineering department a seemingly impossible task - produce a sheeting machine incorporating famous MarquipWardUnited technical features, but with a price to match machinery manufactured in Asia. This task was made even more difficult because the supply of parts or assemblies from low cost labor regions was ruled out. The team did not disappoint and eCon was born.

This sheeter is built with components sourced from first-class American or European suppliers and has a build quality normally found on more expensive sheeters. Best of all, the eCon is built entirely in Phillips Wisconsin USA.

The eCon is supplied in two configurations offering the normal features required for high quality sheeting. A small number of options, augment the highly standardized two-web and four-web configurations. Standardization is the key feature that allows this high quality machine to be offered at such an attractive price level.

The eCon features the industry leading MarquipWardUnited knife technology with features such as, on machine grinding, low power consumption, and 1000gsm capacity. At 1650mm (65”) width and a maximum speed of 300m/min, the eCon offers fantastic value for customers with straightforward paper or board sheeting needs. Even though the eCon is a budget model, the PC based controls package and HMI are easier than ever to use, offering market leading on-screen and remote diagnostics.

With modern offset presses achieving ever higher running speeds and short setup times, the quality of sheets delivered to the press is more critical than ever. Sheets with curl, dusty edges, poor squareness or accuracy will restrict the potential of the press to a point where the cost of a quality sheeter is almost insignificant compared to money lost through poor press production and waste.

When a sheeter is installed in a commercial printing or folding carton plant, it quickly becomes the most critical uptime center. In basic terms, if the sheeter stops, the whole plant soon follows.

With reliability and uptime in mind, eCon loses nothing compared to its more expensive and automated stable mates. PC control, first class electrical and mechanical components, backed by the most comprehensive international service and spares network offered by any sheeter manufacturer, ensure that your plant gets sheets when you need them.

So now you can afford to buy the sheeter your production team wants at a price that keeps your CFO happy too.

The eCon is designed to work and priced to sell