UK-based UV curing specialist GEW has reported that the company’s recent return to Labelexpo Americas has been a resounding success. After a four-year break, the mid-September event was similarly busy to the 2018 show with over 13,000 visitors. 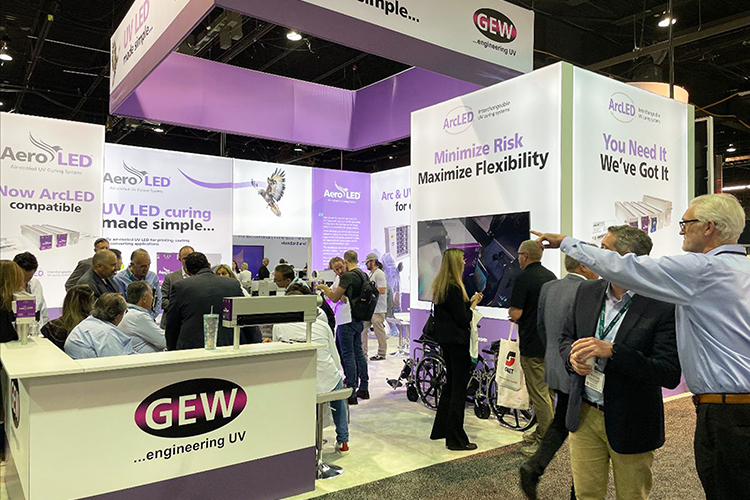 GEW’s stand at Labelexpo Americas was a hub of activity throughout the show.

GEW’s new air-cooled UV LED curing system, AeroLED, was of particular interest to many visitors and contributed to GEW’s stand being a hub of activity throughout the three days of the show. Robert Rae, Managing Director of Sales at GEW, explains: "With energy costs soaring globally and showing no signs of easing, we have found a dramatic increase in the level of enquiries about our LED systems and the energy savings they bring when compared to conventional UV." He adds: "Our LeoLED water-cooled LED system has already been delivering huge savings for many of our customers since its launch in 2019, and now the even lower power consumption of AeroLED is taking these savings to another level. AeroLED has more than enough power for most narrow web applications and the lampheads are now ArcLED compatible, which means they are easily interchangeable with GEW’s conventional E2C lamps. In a nutshell, an AeroLED upgrade can be achieved in less than one day and offers the fastest, most affordable route to LED printing."

The company also reported that a significant number of its UV curing systems were in operation at the show, with GEW lampheads running on the majority of the leading manufacturers’ presses. Marcus Greenbrook, Director of International Sales at GEW, comments: "Bearing in mind the lower-than-usual number of working presses at this year’s event, we were delighted to see an impressive range of GEW lampheads at work. In all we had 19 full UV systems in operation, across nine different press manufacturers. This represents by far the highest number of UV systems on show by any supplier, and is testament to the quality and dependability of our equipment."

He concludes: "It was great to be back meeting customers and industry friends again after four years. We didn’t know what to expect with this being the first Labelexpo for some time, but for us, this was a great show and our new AeroLED product launch was warmly received with great interest. It’s good to be back!".