Once again, the Brixen Water Light Festival shines even bigger and brighter in May. The success of last year's edition as to the number of visitors, the wide coverage from the international press and the number of light events has led to a new, even more spectacular Brixen Water Light Festival this year. Many novelties this year start from the important partnership with Durst, which thanks to its philosophy is in ideal symbiosis with the festival. Durst Group is a world-leading manufacturer of advanced digital production technologies with its headquarters in Brixen. 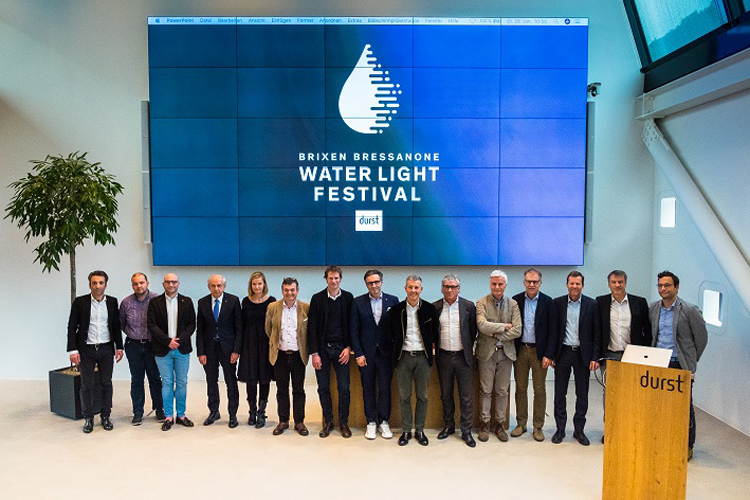 The Brixen Water Light Festival powered by Durst is part of the official network of the World Water Day on 22 March. As a member of UNESCO's International Day of Light on 16 May, the festival is one of the initiatives that aim to highlight the importance of water and the constant appreciation of light.

Colour and light are not the only affinities between the festival and the company. Durst is a family business with an 80-year history, in which innovative strength, sustainability and quality are the central values. Values that the company shares with the festival. Thus, both partners are committed to spreading a respectful awareness of the sustainable use of nature and water resources and see their task in raising awareness of conscious and environmentally friendly consumer behaviour.

"Durst stands for the innovative power and responsible entrepreneurship at the Brixen site", says Christoph Gamper, CEO and co-owner of the Durst Group. "We are digitizing production technologies around the world, reducing the need for water and energy in production and enabling sustainable, high-quality products in many industries. As a partner of this year's Water Light Festival, we would therefore like to communicate not only our fascinating habitat "mountain" and our handling of natural resources, but also to present the positive impulses and industrial developments that result from it.”

On the fourth edition, the event will also be expanded geographically. This year, for example, light art installations will also be shown at water locations in the old town of Klausen, the Fortress of Franzensfeste and the Engelsburg of Neustift Monastery.

While in Brixen, Klausen and Franzensfeste the installations will shine again between 9 pm and midnight, the show in the Engelsburg will be open to visitors during the day.

Also in the new year, artists of different origin, education and nationality take part in the festival and deal in their works with the two natural elements of water and light. For 24 evenings, "Water is life - light is art" will be the central theme of this unique festival, once again drawing attention to how beautiful, precious and, at the same time, fragile the world we live in is.

The focus is again on the theme of water, which is viewed from different angles, highlighted or artistically presented. Cultural, ecological, social and economic reflections offer an almost unlimited breeding ground for artists. "The focus is on the city's special features and the valuable corners that are often overlooked. Light art and contemporary art meet in this festival and complement each other", says Stefanie Prieth of Brixen Tourismus, project manager.

Also this year the Brixen Water Light Festival powered by Durst is part of the official network of the World Water Day on 22 March. As a member of UNESCO's International Day of Light on 16 May, the festival is one of the initiatives that aim to highlight the importance of water and the constant appreciation of light.

During the festival, Brixen, Franzensfeste, Klausen and Neustift will be given a new atmosphere by promoting and supporting a broad reflection on topics of global interest such as climate change and the availability of natural resources. Also, this year the Brixen Water Light Festival powered by Durst boasts the "Green Event" certification. The focus is on the use of energy from renewable sources, environmentally friendly products and digital advertising campaigns. In addition, cooperation with Deutsche Bahn will be resumed in order to raise the awareness of tourists to leave their car at home and reach Brixen by train.

The event with free admission is organised by the association BrixenCultur in collaboration with Brixen Tourism with the support of the Municipality of Brixen and the Province of Bolzano.