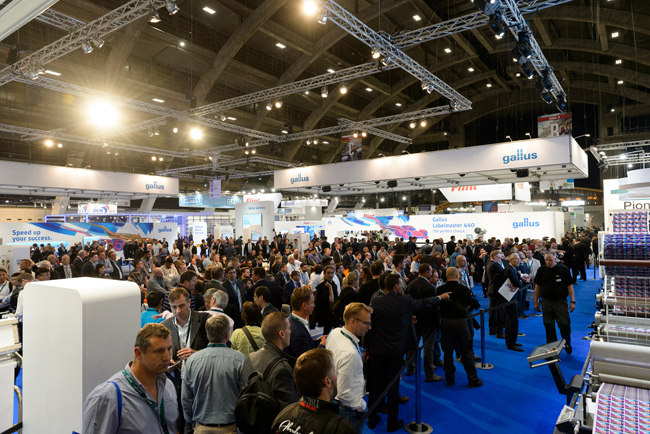 Gallus and Heidelberg work on several joint projects to advance digitization in companies and offer customers a concrete added value.

"Speed up your Success“ was the Gallus motto at this year’s Labelexpo in Brussels and this motto was clearly visible in all areas of Gallus’ booth in hall 5. From conventional label printing machines and the latest digital printing technologies to screen printing and services, offered by a joint project of Gallus and its parent company Heidelberger Druckmaschinen AG (Heidelberg) nothing was missing. No surprise the Gallus stand in Hall 5 was absolutely crowded throughout the whole duration of the fair.

During the hourly live demonstrations, the Gallus Labelmaster Advanced, equipped with multiweb features, proved itself not only in incredibly high velocity, but also with easy handling and a maximum of flexibility. This was demonstrated while working on several webs which were then assembled to a three-sided peel-off label. In the following presentation, held on the basic version of the Gallus Labelmaster, it was impressively shown that printing speed of rotative screen printing processes is no longer a limiting factor in conventional labelprinting. Equipped with a screen printing unit which was especially developed for the Gallus Labelmaster and other Gallus Screeny speed printing components, printing speeds of over 100 m/min were presented at a constantly high printing quality.

Digital inline functionalities and digital embellishment are in every mouth

Another Gallus highlight were the additional finishing functionalities, offered modularly for the Gallus Labelfire. Firstly, there is a new screen printing unit available to be integrated in either upstream or downstream printing. This makes it possible to print highly opaque screen printing white on transparent foil, which guarantees best printing results in continuous digital printing. Secondly, the Gallus digital team presented the prototype of a digital embellishment unit, modularly integrated in the machine as an additional finishing unit. With this Digital Embellishment Unit (DEU) gloss and matte spot varnish as well as haptic relief effects can be produced in an atmospheric UV inkjet process. Initially, the DEU will be available for the Gallus Labelfire, Gallus ECS 340 and Gallus Labelmaster.

Gallus and Heidelberg work on several joint projects to advance digitization in companies and offer customers a concrete added value. The product Gallus mCall, for example, offers an automated ticket creation: the machine autonomously transfers all necessary data to the Gallus helpdesk, which reduces the need of making phone calls and mailings and makes the mCall offer faster reaction times to the service organization.

Christof Naier, General Manager of the label printing business concludes: „All in all, this Labelexpo was one the most successful Gallus has ever participated in. We closed more deals than at any fair ever before. But also the positive feedback our customers gave us to the large number of innovations we presented, concerning not only our products but also our new services has proved that Gallus is on the right track. With these new products and services, we face the digital progress and are well prepared for the upcoming future.”