Process efficiency and ability to meet all customer demands are the best results obtained by Etiquetas Rocafer through XFlex X4 press in the course of a long history started 52 years ago. 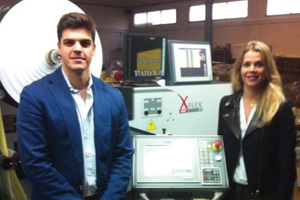 Etiquetas Rocafer started its activity in 1962, when Antonio Barberá Pérez decided to settle on its own after having worked in the typography that his father had in Madrid, where he was originally from. At 22 years, and with two printing machines, he establishes his company in a small venue in a neighborhood of Seville, Spain.

It’s not until 1970, when he can buy a shed where he install the machines that he had acquired during those years: a Jores and a Minerva Heidelberg, along with other printing equipment such as a sealing machine and a die-cutting machine.

During the 1970s he begins working with a letterpress rotary machine with 4 colors and adds one inspection machine to the company equipment. By that time his aim was to specialize in the printing of form feed self-adhesive labels. From the very beginning he decides to integrate the entire production process including design and photo developing, and later introducing the first Macintosh computers used to create the graphics and connected to a machine for the processing of polymers.

The first flexo machine is installed in 2007. The machine width is 420 mm with 8 UV printing units, reverse printing, rotary screen printing and hot and cold stamping. Thereafter his children, who were already part of the business, take over the company and continue with the same policy of pursuing customers’ satisfaction through the offer of tailored solutions. The company is also distinguished by a commitment to technological innovation, which has enabled it to grow in these times of crisis. In 2011 it carried out a project to modernize its pre-press system and in 2012 it added a finishing line with three units: hot stamping, embossing and flat screen printing.

The latest addition to the equipment of Etiquetas Rocafer dates June 2013 and is an OMET XFlex X4 with 8 UV flexo colors, cold foil and film printing capability. The reasons that led them to decide for OMET over the competition, considering that they were already covered in many of the needs that now the market demands, have been, among others, the machine flexibility and the possibility to optimize production.

Etiquetas Rocafer currently works especially with clients whose main business is export, which means it has to adapt to the continuous changes of international markets and their laws on product labeling. All this means that their runs get increasingly shorter and with numerous references because customers avoid to make stocks but need to adapt labels to the different outlet markets and, in the meantime, expand their product portfolios. On the other hand, there are also customers that are well established in the market and require longer runs at very competitive prices.

"With this machine we have managed to satisfy both markets, that of short runs, with many references and little rotation and that of long runs and established products", states Victoria Barberá, Managing Director of Etiquetas Rocafer. "In addition to the ease of use and the quick adaptation to working with it, the main advantages we have detected during the months we have been operational on XFlex X4 are, among others: the closed chamber ink pans, which allow to use little ink, especially pantones, for short runs as well as avoid splashing when speed increases during the printing of long runs, and the roll-to-roll die-cutting system that, beside allowing the die-cut of irregular shapes, prevents shrinkage breaks when speed increases during long runs printing". So concludes Victoria: “OMET’s press has helped us to improve the company’s processes. The possibility to work efficiently on small runs led to the optimization of the polymers processing and thereby offered us the possibility to become more flexible and proficient."