Spain has been the second country, after Japan, which more distinctions collected in this World Star edition of 2013. the awarded companies will receive its trophy in Düsseldorf (Germany) on May. 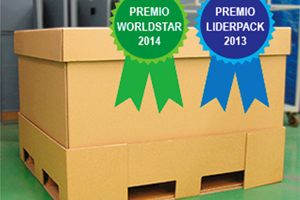 Organized by World Packaging Organization (WPO), World Star awards are the more important packaging awards of the world. in this edition participated a total of 249 works from 35 countries. World Star awards join innovation and design of the best packaging around the world, awarding works that in their countries have also won a previous prize, in the case of Spain are the Liderpack Awards.

Tecnicarton won by fourth consecutive year WORLDSTAR AWARD 2014 for a packaging made to export cars headlamps through sea to China.

This product is the result of the hard work of the engineering department that Tecnicarton has integrated in its organization and that it is working, day by day, on new solutions to reduce costs on transports. this solution replaces the reusable packaging with the consequent save on material, transport and CO2 emission reduction.

The new packaging incorporates a new fixing system for the parts which immobilizes the headlamps by three axis (X,Y,Z).

Until today the transport of these parts was made with reusable packages, generally metallic and heavier, with an added cost of the return packaging and with high levels of CO2 emitted.

The challenge of this design was to develop a more sustainable one use solution, resistant and stackable during sea transport, and that also protects each part. the combination of a corrugated cardboard inside with the special immobilization system and with the corrugated cardboard box, reaches all the expectations.

And from an environmental point of view it has also another benefit, it is all made of cardboard so it can be 100% recycled.