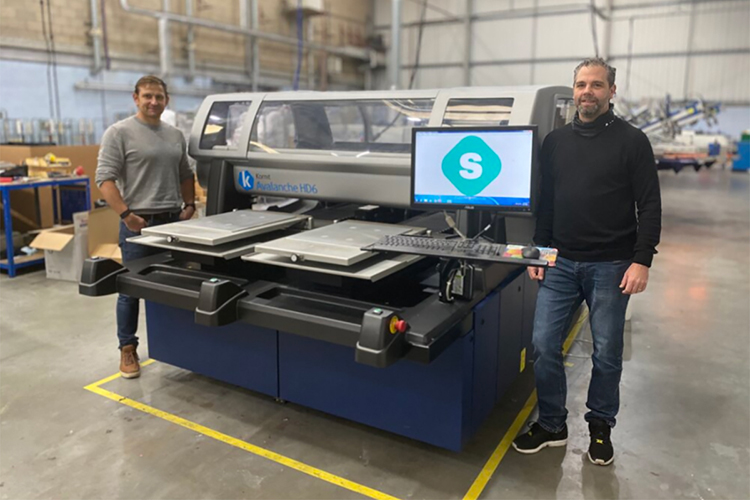 ìThe Kornit Avalanche HD6 has brought us flexibility, adaptability, and profitability with a high-definition print.î

While the business intends to continue using screen-print presses to fulfill high-volume orders, they found growing demand for on-demand production in smaller quantities, delivering complex graphics with little setup time and cost while eliminating inventory risk. By adding Kornitís efficient, sustainable technology for retail-quality impressions at low and consistent cost per print, Screenworks can produce only what has been sold, to achieve a streamlined, highly responsive production model.

Using a barcode-based system for routing artwork from point of sale to the print system, to the dryer for curing, to quality control, and on to shipping, Screenworks believes Kornit Avalanche HD6 is a critical component for achieving its goal of increasing automation and reducing waste from its cycle, ensuring customers receive their goods promptly and reliably.

ìOpening up different sales channels for us, the Kornit Avalanche HD6 has brought us flexibility, adaptability, and profitability with a high-definition print,î said Alan Porter, Operations Director at Screenworks. ìThe pretreatment was a key factor for us, as we can load a shirt, print it, take it off, and dry it without having a secondary process. Training people on this system is a lot easier and a lot more efficient than it would be to train more screen-print operators.î

ìScreen printing will always have a place in apparel decoration, producing simpler graphics in large quantities, but the more agile producer can handle smaller jobs, quick turnaround, and unlimited imagery, while remaining profitable every time,î said Chris Govier, KDEU Managing Director. ìThatís where Kornit excels, and thatís what brings success to businesses like Screenworks, which finds opportunity and versatility by having the right technology for any challenge that comes along.î