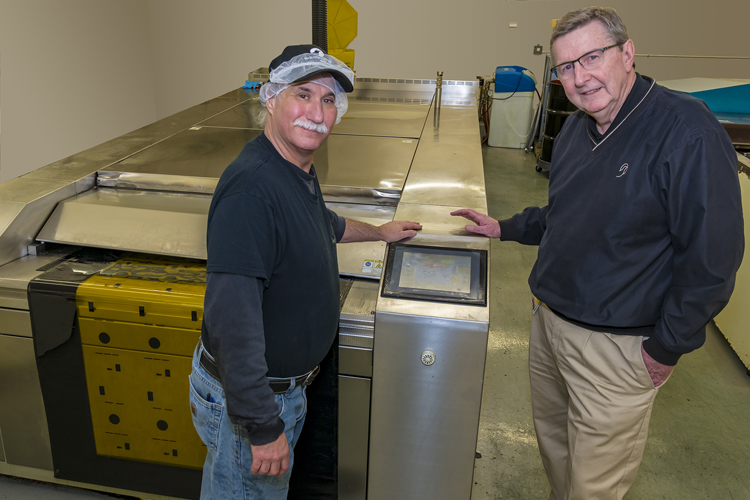 From left to right: Mark Hamblin and Gene Martin at The Robinette Company Bristol facility.

[Redacción] Asahi Photoproducts, a pioneer in flexographic photopolymer plate development, today reported that flexible film and paper packaging manufacturer and converter The Robinette Company has been able to completely eliminate solvent-based platemaking from its Bristol, Tennessee, plant. The company, which employs 300 and specializes in sustainable packaging for the food, beverage, nutraceutical, construction, textile and health care markets, has been using Asahi AWP™-DEF water-washable plates for several years, and is in the process of upgrading to Asahi AWP™-DEW plates for even more productivity improvements.

“We have reduced our platemaking process from three hours to one hour for the first plate out, with subsequent plates delivered in 20 minutes,” states Gene Martin, Plant Manager at the Bristol facility. “This has given us a 33% increase in capacity in the plate room. Now, with the Asahi AWP™-DEW plates, the first plate out time will be 20 minutes, with subsequent plates delivered faster than that.”

In addition to revolutionizing its plate room and eliminating all hazardous chemicals, The Robinette Company has also achieved significant pressroom benefits. With solvent plates, presses at Robinette delivered a 49.58% Overall Equipment Effectiveness (OEE). Now with Asahi AWP™ plates, that has jumped to 64.92%, a 31% increase in OEE for the press room, with reduced makeready times and fewer press stops for plate cleaning. More specifically, the average time per month it took press operators to get a job in register with solvent plates was 297 minutes, while AWP™ plates took an average of 151 minutes.

“That’s a 50% reduction in makeready time,” Martin reports. “This is largely driven by the reduction in changeover time for jobs that share like colors, which represents about 65% of our jobs and has been reduced by two hours. Add all of that to our 33% gain in capacity in the plate room, and it is fair to say that with Asahi AWP™ plates, our plate and press rooms have been revolutionized!”

Clean Transfer Technology plates from Asahi Photoproducts have been specifically engineered to transfer all remaining ink to the printed substrate. This is due to the plate’s lower surface energy. Clean Transfer Technology plates do not need to be cleaned as often as conventional digital solvent plates. Reduction of plate cleaning stops creates a significant productivity improvement as well.

The Robinette Company is the first in North America to use the next generation of Asahi water-washable plates, AWP™-DEW, and is in the process of implementing these plates. “Our first time out for a plate with the AWP™-DEW plates is reduced from an hour to 20 minutes, with subsequent plates produced about every 15 minutes,” Martin says. “Along with this, we were also the first in the country to have Asahi’s AWP 4260 inline plate processor, which reduces water consumption by reusing the wash water and reduces the amount of operator intervention required in the platemaking process. We use the AWP 4260 for production, but we also have a smaller offline Asahi system we use in case we have a damaged plate on press and we are down. We can generate a new plate in a very short time with this system.”