Durst has opened a futuristic new headquarters and Customer Experience Center in Brixen, northern Italy, that represents a watershed in its transformation into a highly integrated process service provider. 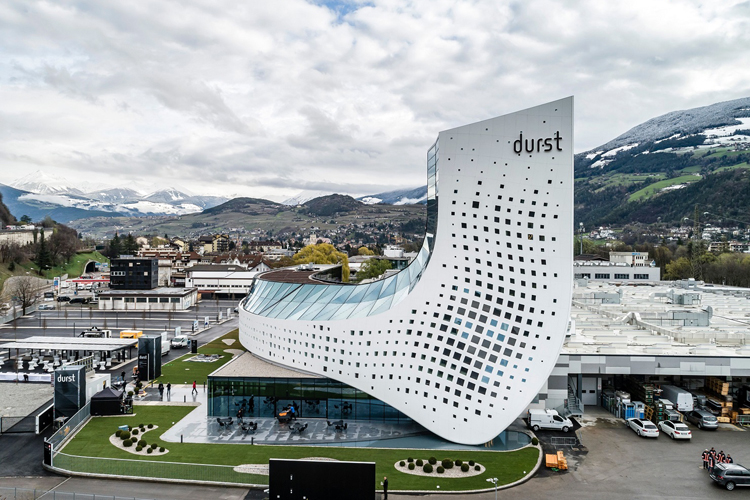 In future, Durst will invite more of its international customers to the Customer Experience Center in the 5,700 square meter headquarters that embodies the transformation into a highly specialized, high-tech business. The integrated concept has been incorporated into the the architecture of the building as it connects a new administrative block with production facilities.

In future, Durst will invite more of its international customers to the Customer Experience Center in the 5,700 square meter headquarters that embodies the transformation into a highly specialized, high-tech business. The integrated concept has been incorporated into the the architecture of the building as it connects a new administrative block with production facilities.

The iconic design for a company building with a tower was first presented more than 50 years ago, but never realized. Architects Monovolume pursued the original concept and designed a flat, floating ‘wing’ with a six-storey tower. The powder-coated metal faēade has 850 multi-colored, luminous window elevations arranged in pixel-like fashion. The pixelated facade of Durst’s new headquarters is also a pointer to the company’s areas of business, as Durst is a global leader in high-performance printing systems – from image data processing and printing to final product finishing – all from a single source.

Durst employs more than 700 people and has more than 20 subsidiares across the world. Its history dates back more than 80 years is closely associated with the Oberrauch family, which is now in the third generation of ownership. The management board recently underwent a management change with Christof Oberrauch handing over the reins to his son, Harald Oberrauch. At the same time, Christoph Gamper was appointed CEO, and has now been given stronger ties to the long-established business through joint ownership.

Mr Gamper has led Durst’s transition and introduced a new management structure and a new business philosophy: passion for technologies and markets, innovation as the driver, and active collaboration and participation in every area.

“This is a very proud day in the long history of Durst,” Mr Gamper told guests. “We do not fear the future. We are here to shape the future. We have the best employees, the best customers and the best technology. Driven by the mantra of innovation, Durst offers complete solutions from pixel to output. Here at our headquarters in the south Tyrol is where things come full circle with the mountain habitat and the aim of focusing not just on the machines but also on the people behind them.”

He added: “Here it is not a question of appearance but of essence, of conveying the idea to the outside world, of creating a protected space for innovation, of bringingg together very special people who have devoted themselves to a vision: to create something new, to inspire, and to always ask the next question.”